Immediately after his death in 1975, Andrić’s literary executors published, as his fourth novel, a chronicle of Sarajevo called “Omer pasha Latas”, which was seemingly intended by the author to complete his chronicles of Travnik and Višegrad and to render to all three of his childhood cities the homage he felt was their due.

This posthumously published Andrić’s work is the biography of a historical personality, Omer pasha Latas, Christian Serbe, who deserted from the Austrian army to the Ottoman Empire, converted to Islam and became a celebrated Ottoman warrior and statesman in the nineteenth century. The reformist Sulatan Abdul Mejid/1839-1961/ sent Omer pasha to Bosnia to suppress the conservative and reactionary feudatories who opposed imperial reforms/ Tansimat/. Andrić however, is less interested in the historical aspects of Omer pasha’s activity than in the human drama. 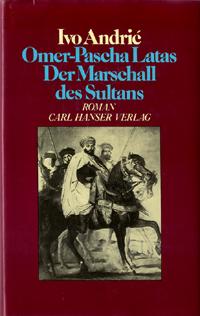 For Omer pasha himself the inhospitable land is similarly oppressive, although his initial journey into Bosnia from his native Croatia was itself an escape. He is cut off from that distant former life, however, and his freedom of movcement and action is thus felt to be severely circumscribed. Hisd situation is similar to that of the two Viziers–Mehmed and Jusuf-–who built the bridges over the Drina and the Žepa, because of a similar feeling of disquit: a sense of the complete gulf between the two parts of their lives.

The closing chapters of the novel are written from the point of view of the Austrian consul at the time. The undrlying theme of the letter – that the town of Travnik and the whole of Bosnia resemble a prison- is taken from an authentic  letter from the Austrian consul to Prince Schwarzenberg, dated 5 th June 1851.

At the beginning of November, chief Bogdan Zimonjić arrived in Sarajevo with four other leaders from eastern Herzegovina. These five men had led the company which defeated Pivodić, the commander of Alipasha’s force at Zijevnje, having first rejected an invitation to join him and move against Omer Pasha’s army. The Seraskier had now invited them to thank them for their royalty and give them further instructions for the maintenance of peace and order. But Omer Pasha had another, and much more important reason for seeing these men personally and talking to them. He knew that in the campaign to stamp out all centers of resistance and unrest, after Bosnia it would probably be the turn of Montenegro, and that that task would almost certainly be entrusted to him. And in the greatest secrecy, he was preparing himself for that eventuality. It was important for such a campaign in Montenegro that peace should reign on the border with Herzegovina, and that he should have, amongst the Serbs there, several of the more prominent men on whom he could rely at least to some extent. Therefore he reckoned that, with promises and gifts, he could gain the allegiance of one these chiefs (preferably Zimonjić, if possible), to find out from him about the situation on the border, and to see to what extent he could count on his help in the future.

Omer Pasha received first of all chief Bogdan Zionjić by himself, as the most important and most prominent of these men, while the rest were detained downstairs in the large adjutant’s room. The wooden staircase creaked and groaned under the tall and heavy Zimonjić, as he was being led upstairs to the large reception room. When he found himself in front of Omer pasha in that brightly lit, carpeted room, into which the clear November daylight poured through all the windows, the chief paused, like a mountaineer in a clearing, blinked his eyes, and threw his head back slightly in order to see around himself more clearly and find his bearings. Omer allowed him a moment to do this, and then cordially and simply offered him a seat.

(When he had occasion to speak in private like this with influential men from the people, Omer would adopta special tone and adjust the colour of his voice. He dig up that tone and that voicefrom somewhere in the deeply buried memories of conversations among the Likans and the Bosnians which he had overheard as a child at various fairgrounds. He was convinced that this “kinsman-like” way of speaking made him irresistible and able to move and win over everyone. But he was a victim of self-deception and an exaggerated opinion of himself in this respect, as often happens to men who, because of their exceptional success in life, have to much confidence in their power and their intellect, and too little respect for anyone else’s. In trying to speak intimately, directly and in broad dialect, he was forgetting to what extent the passage of many years and his great rise in Stamboul had distanced him from ordinary people, to whom he had in any case never been particularly close. Self-confident and sure of himself, he was unable to feel how a false note emerged from under his affected speech and behavior, which everyone except himself could detect and feel, and which had an effect exactly opposite to that intended. So, at least in this respect, he gave himself away by the very kind of behavior which he hoped would mislead and deceive others.)

Omer repeated his invitation and, unexpectedly, grasped with both hands the chief’s right hand. That hand was white and strangely flabby, but huge and heavy like a half-bread loaf; and yet one somehow felt the dormant striking power emanating from it; the hand was so large that the Pasha’s two hands, strong but thin, beautifully shaped and dark-skinned, could not cover it completely, and seemed on it small and dried out, as if charred.

Without apparent resistance, Zimonjić still hesitated to sit down; motionless, he blinked his eyes lightly, and finally spoke. His voice, which was also hesitant, was paler in colour and higher in pitch than might have been expected from such a powerful body and such a masculine face.

‘If we had … invited my companions also … so that we could all be present at these talks. If you … have no objection?’

As he spoke, he paused approximately at those places where Omer’s name or his titles should have been inserted, but which he, for some reason, obviously would not or could not utter.

‘I have no objection, but I think that it would be better for the two of us, as the two leaders, to talk together first, and they could come later. I too have my companions, but as you see I have not invited any of them. You can’t do a job of work in company.”

Autumn. The grey and deserted valley of Donje Polje, and traversing it, as if sketched in, the thin rivulet winding its unpredictable course and the well-trodden road to Gacko. And he was again riding along that road, and again, as at this time last year, on the eve of Saint Dimitri’s day, a wicked Turkish bully, Dervo Smajević, intercepts him and, in blind fury, rushes straight at him on his horse.

Before they had time to draw any weapons, they had grabbed each other with their arms and, locked together, fallen from their horses, ripping off the tangled reins. Gripping each other firmly and inseparably, they wrestled and threw each other about, until they began to roll down a steep incline overgrown with dead autumn grass, and – like a single huge ball of convulsively straining muscles and bones – rolled into a narrow deep hole beside the road. Only then did he succeed in pulling himself together and separating himself from the big Dervo, who lay unconscious beneath him. Quickly, he stripped Dervo of his weapons and, bruised as he was, scrambled, he himself did not know how, on to the road where his horse was waiting for him as if rooted to the spot.

And now, once again locked up in a showdown with an invisible adversary, as a single body, he was falling continuously, for a long, terribly long time, down a slope into a kind of bottomless pit.

All this lasted only an instant, and when, with a supreme effort, he rid himself of that sensation of falling, composed himself and felt his legs beneath him, now again on the multicoloured carpet of the Seraskier’s room, Omer Pasha was standing in front of him, with his hands still on his chest, and asking him loudly (probably for the second time):

“Yes … you can,’ he finally stammered, absently and mechanically, as if with paralyzed tongue.

‘Well then, understand that before you stands not Omer Pasha, but Mićo Latas from Janja Gora. And if you do not believe my words, believe this…’

Omer took his hands away from his chest, briskly removed the heavy fez with its blue tassel and threw it theatrically onto the white divan, and then, joining three fingers of his right hand together – crossed himself without a word, with lowered eyes, and with humble, quick and practiced gestures.

Zimonjić had seen many strange things in the forty years of his life, both from the Turks and from his own people, and had heard within his family, who had traditionally been chieftans, a great deal about all that had been happening in the past and could happen again. He knew well that one could expect anything from any man and, in time, would see even what one had thought could never happen, but this was too incredible and too unexpected.