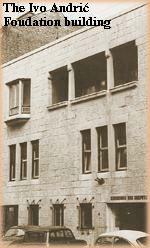 The Ivo Andrić Foundation, founded as endowments usually are in Yugoslavia: by the wish of the founder, his desire, as Miša Anastasijević pronounced an entire century ago, to endow his property “for the benefit of the fatherland“. The establishment of this Foundation was a critical moment in renewing the tradition of endowment work that had deteriorated after the Second World War.

Ivo Andrić died on March 13, 1975, and the first meeting of the Foundation Managing Board was held on March 12, 1976. As early as 1981, the Managing board ascertained that “behind the modest information of the Foundation’s basic goals are hidden not only the possibility of fertile and elaborate work, but also the obligation to realize important undertakings of a scholarly, literary and cultural nature related to Andrić’s name.

In the past, the Foundation has had both happy and trying moments, but the people within it have always endeavored to keep the institution faithful to its goals, to stimulate interest in Andrić’s works, to contribute to their study and to deepening the understanding of Andrić’s creativity, but also to serve the foremost interests of Serbian literature, art and culture.

The Foundation is the sole beneficiary of the copyrights to Ivo Andrić’s works and collaborates with all the publishers of his work.

The Ivo Andrić’s Foundation grants scholarships to foreign students of Serbian studies, enabling them to stay in Belgrade and study Andrić’s works. The Foundation also grants scholarships to postgraduate students at local universities. It regularly works in association with all events that commemorate Ivo Andrić and with institutions that bear Andrić’s name. It works in association with all local important literary events, sponsors amateur and children’s literary competitions, participates in campaigns to help school and poorly stocked libraries, and in all other humanitarian campaigns.

The library of the Ivo Andrić Foundation where various materials of the interest to the study of Andrić's creative works and life have been collected and kept, is distinct among scholarly-research institutions. All important and professional information on the author's work and life can be obtained there, making thelibrary of the Foundation a true treasury of data on Andrić. The literary holdings of the include various editions of Andrić's works in Serbian and foreign languages (although the most representative examples are kept in Andrić's personal library in the Memorial Museum). The literary holdings also contain a wealth of literature on Andrić, as well as numerous dictionaries, reference books and encyclopedias, large number of newspaper clippings and magazins with texts on Andrić. The same can be said for the archive material which is comprised of Andrić's manuscripts and correspondence. The greater part, according to the author's last testament, was handed over to the Serbian Academy of Science and Art. The Ivo Andrić Foundation undertook the task of organizing this voluminous material, and in 1988 published a catalog of Ivo Andrić's personal holdings. The center also has a valuable commemorative photograph library, video library and record library, which can provide additional information about Andrić.

Andrić's last wish was that "part of the funds from his legacy should be used to award the best short story or the collection of the short stories". For the next mandate, the members of the jury for the Andrić’s Award will be elected shortly:

Since 1982 the Ivo Andrić Foundation has published a regular annual publication entitled Sveske Zadužbine Ive Andrića (Journal of the Ivo Andrić Foundation) which publishes Andrić's previously unpublished manuscripts and correspondence, scholarly and critical studies on Andrić's intellectual universe, on his complex and stratified work and on his life, as well as on the times and world in which he worked.